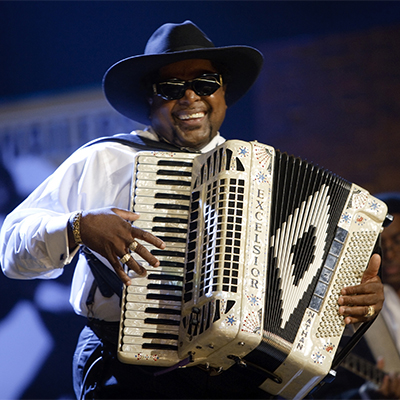 Nathan & the Zydeco Cha ChasZydeco -Thursday 8:00 PM
The music of Nathan and the Zydeco Cha-Chas is the expression of a remarkable South Louisiana family. Growing up in a Creole-speaking home in St. Martinville, Nathan Williams eagerly sought out the music of Zydeco originators such as Clifton Chenier. Later, while recovering from a serious illness, Nathan decided to dedicate himself to learning the accordion. That dedication blossomed into an illustrious career, which now spans three decades. Nathan formed The Cha-Chas back in 1985, and since then has brought his unique take on this regional South Louisiana music to all corners of the globe. From Lincoln Center in New York to The Grand Ole Opry in Nashville, Nathan’s music has crossed all barriers to speak to the very heart of his audience.

Inducted into the Louisiana Music Hall of Fame in 2005, Nathan Williams was also later honored with the Zydeco Music Association’s Lifetime Achievement Award. The Cha-Chas have been voted the top Festival Band in the country, and have won the coveted Big Easy award for Best Zydeco Band for several years running. Nathan and his band have been featured in the New York Times, Essence and People magazines, and on the cover of USA Today.
Keepers of the Zydeco Flame, they are committed to keeping their Creole Heritage alive. zydecochachas.com 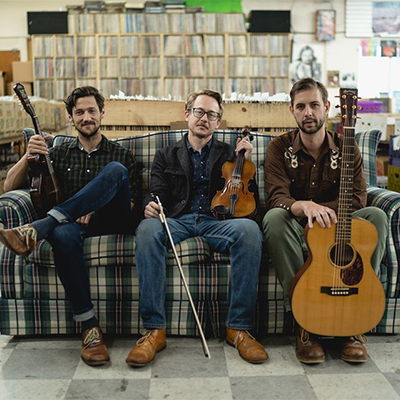 Clinton Davis String BandAmericana - Thursday 6:00 PM
The Clinton Davis String Band plays old time fiddle tunes and banjo songs of Appalachia and the Deep South. Clinton Davis grew up in the Ohio River Valley of northern Kentucky where his family has lived for five generations. After living in Southern California for the last decade, he has built a strong reputation for performing the music of his home with integrity and skill. He has performed at folk festivals across the country including Wintergrass, Port Townsend Acoustic Blues Festival, National Jug Band Jubilee, Brooklyn Folk Festival, Topanga Banjo & Fiddle Competition, and the Santa Barbara Old Time Fiddler’s Convention. No Depression called his work “a joyous and soulful restoration of one of the lost treasures of American musical tradition.” Clinton is an official Deering Banjos Artist and is also dedicated to preserving musical tradition as a teacher, offering private instruction and occasionally appearing at music camps. ClintonRossDavis.com

Get in on all the music at Gator By The Bay. Downbeat for the festival is 6 PM on Thursday evening. Under the big tent on the west end, enjoy an evening of music from Americana to Zydeco!

The evening features two dance floors, comfortable seating and an upgraded table service option. Three specially selected food vendors will offer up tasty creole dishes and beverages, hot and cold for sale. Back by popular demand, we will be presenting this intimate concert for the fifth year in a row. 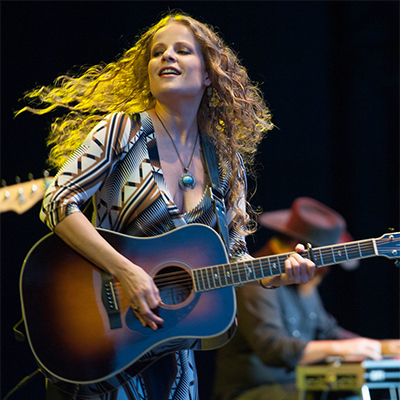 Alice WallaceAmericana -Thursday 7:00 PM
2019 was quite the year for country/Americana artist Alice Wallace. Her album “Into the Blue” on Rebelle Road Records/JTM Music was named one of “2019’s Essential Albums” by Saving Country Music, and was listed among the “Best Albums of 2019” by both B-sides and Badlands and Schwindy’s Buzzin Dozen on Americana Highways. Her song “The Blue” was named Alternate Root’s #1 song for 2019, and Rolling Stone listed it among its “10 Best Country and Americana Songs to Hear Now”.

These are just some of the accolades that have been coming hard and fast for Alice in recent years. Named the 2017 Female Vocalist of the Year at the California Awards, and winner of the 2016 LA Music Critic Award for “Best Country/Americana Artist” and “Best Video (official) Female,” the singer/song writer is a little bit country, a little bit folk, and all original. Born in Los Angeles and raised in St. Cloud, Florida, Wallace developed an interest in music as a child; her father was a semi-professional musician who toured regionally in the Southeast. Taking up the guitar at 10, Wallace absorbed a variety of influences from the cross-over country and roots favorites of her parents. Today, her musical tastes gravitate toward the modern Americana scene. Her stellar voice and refined songwriting skills are all steeped deeply and proudly in Southern California textures and lore, and she has even been the greatest yodeler in the country today. AliceWallaceMusic.com